Trump at a press conference

What happens in Venezuela could be analysed from many points of view, through several conjectures and political stands. There are those who support Nicolas Maduro, despite his evident authoritarian mood and there are those who strongly criticize him, and for many people there aren’t middle points of view. Sometimes falling into polarized visions when talking about the Venezuelan crisis is impossible. However, it is possible and very necessary to make nuances, especially from the left wing politicians. Not all the left in Latin America has been in favor of the behavior of Nicolas Maduro and his government. Some even say that the current Venezuelan leader has made mistakes and done things that Chavez would have never done. Criticizing Maduro is not necessarily endorsing other actors in the international scenario, such as Donald Trump, another leader than in less than a year of government has shown authoritarian and even fundamentalist tendencies.

About Trump we must say that he has used Venezuela, as well as Mexico, the wall and the immigrants, as the main and almost the only issues in foreign affairs with Latin America. It’s clear the way in which he has approached the relations of the US Government with this region, guided by confrontation and self-defensive. Trump is convinced that immigrants are the cause of the structural security problem in the United States.

In recent weeks, the US talked about a possible intervention in which the military component was not ruled out. Donald Trump himself talked about that chance. This was not well received in Latin America nor even by the Presidents who have always been critical of Maduro. They signed a statement in Lima against any possible military intervention by the United States or any other country. 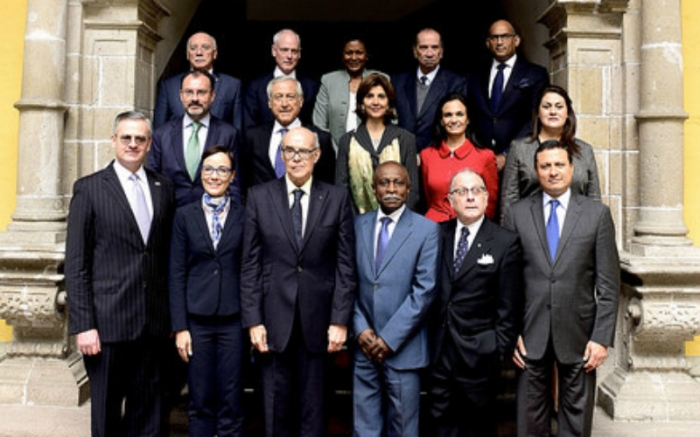 Foreign Ministers of Latin America in Lima, August 8, 2017. Photo taken from the website of the Ministry of Foreign Affairs of Peru

What implications would an intervention have? Many and very serious, not only for Maduro and the members of his Government, but for the Venezuelan people, as well as setting a terrible precedent in Latin America and bringing back dark times of the Cold War. Dark times that the continent has tried to overcome and rectify. It would also be a clear violation of one of the fundamental principles of public international law that condemns any foreign intervention, since it implies an injury to national sovereignty.

On the other hand, some supporters of the Venezuelan Government have decided to criticize it using the argument of national sovereignty and the right of people to self-determination, sidestepping the obvious violation of fundamental democratic principles. They have demanded respect for what happens in that country. However, they forget that self-determination or sovereignty are not permits given to Governments to do whatever they want, especially with human rights. Venezuela has signed international conventions and treaties in this issue in which they commit to guarantee and promote them. These treaties also have various penalties for States that do not fulfill their commitments. Is still any doubt that the Venezuelan government has not complied with them?

Civil society in the Americas has consistently rejected what happens in Venezuela; our task has always been to ensure that material conditions for a dignified life are protected and guaranteed and denounced when it is not. Therefore, and knowing the consequences that would involve a military intervention, we totally disagree with that possibility. Historical experience has shown that the presence of foreign armies in another country has only been a breeding ground for more human rights violations, often in a systematic way.

However, it is important to clarify that any measure foreign governments want to take against the government of Nicolas Maduro is the least harmful possible for the welfare of the Venezuelan people. It is necessary to find alternative solutions that do not deepen the humanitarian crisis of the country in matters of fundamental rights such as food and health.